What I’ve been working on recently…

An addition to the series, “Regrets” shows the dichotomy between sex and love, comfort and pain. It is the moment after desire turns to lasciviousness, and the conflicting emotions of want and regret. The imagery depicts a haunting turbulence, a calming euphoria, and the need for intimacy. 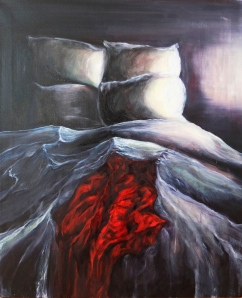 I always saw, I always said
If I were grown and free,
I’d have a gown of reddest red
As fine as you could see,

To wear out walking, sleek and slow,
Upon a Summer day,
And there’d be one to see me so
And flip the world away.

And he would be a gallant one,
With stars behind his eyes,
And hair like metal in the sun,
And lips too warm for lies.

I always saw us, gay and good,
High honored in the town.
Now I am grown to womanhood….
I have the silly gown.

In the United States, it appears though social practice art is no longer fashionable, and issues like identity and feminism have fallen out of favor. Despite this, social engagement in the United States is more important than ever, as our government systems continue to erode and our country struggles to understand our role in the world economy. Social practice and representational art that communicates and connects to a view is harder to measure than reducing Art to a particular style or a personal brand. However, if you listen carefully to the voice of emerging artists, the global tide is beginning to change. Social practice art is making a comeback.

For seven years before becoming an artist, I worked in the tech industry. While the work was not inherently creative, I learned to collaborate and generate ideas, to implement projects globally, and work in an environment of “organized chaos.” Like the Internet, the tech industry is open and generative. People are no longer confined by their location, and are free to collaborate and execute ideas on a global level. Most of us were frustrated with bureaucracy and the status quo, but we were no longer satisfied with voicing our concerns. We were determined to use our resources, build stuff, and fix it.

I plan to bring this attitude to the Art world, because I believe we need fewer restrictions and voices, and more hands to create change. I am discouraged by the status of social Art in the United States, but I am no longer satisfied with merely complaining about it. I am determined to not simply be a voice, but to be the hands. One way I believe I can be a part of the movement to mold and shape the status of Art, is to start by bringing back social relevance, because one important way Art derives meaning is through its connection with people.

In fact, contrary to what it may seem in the mainstream, I believe we’re on the cusp of a global, post-feminist movement. This is evidenced by growing list of successful international female artists such as Hung Liu, Wangechi Mutu, and Lee Jinjiu rising into the art scene and demanding global attention. In their own way, each of these women were able to rebel against their own pressures imposed on them, build upon the work done by generations of women before them, and create their own identity.

I am inspired by these women, and the fact that women across the world are finally being seen as individuals, not just a faceless, mass movement. I am excited to be join this movement because we now have the motivation and the means through technology, to connect with women across the world. I refuse to believe that Feminism was a passing fad because it is far too important to be disregarded. I believe we owe it to the generations of ordinary women who have paved the way, simply by existing, by suffering, and letting their brave voices be recorded and heard. These women put the wheels in motion, and it is now our duty to listen to those voices from the past, use technology to connect and collaborate globally, and finally, use our hands to create.

I love editorial illustrations. I love the intense thought process, its relevance to our times, and the humanistic quality of the visuals that lends itself so well to interesting thoughts and ideas. Here’s one I have been working on about the Princeton mom would urged young women at Princeton to get married before leaving college: 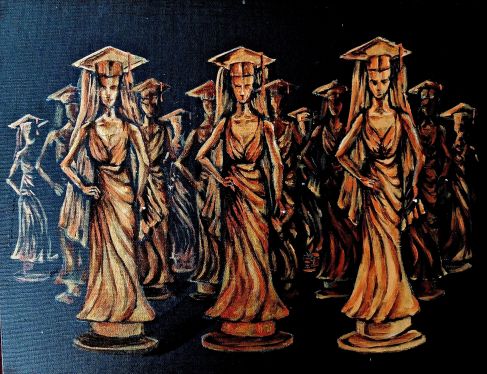 In case you haven’t been following the media, a Princeton alumna and mom wrote a letter telling women that the, “cornerstone of your future and happiness will be inextricably linked to the man you marry, and you will never again have this concentration of men who are worthy of you.” This sparked a feminist knee-jerk reaction, but I questioned it because– well, I felt it was more interesting than that. It not only reduces the aim of higher education to a commodity and women to a prize, but it touched upon an elitist sentiment that no one ever wants to talk about. Now, personally, I consider this woman to be the Princeton equivalent of the sorority girl of the sorority girl rant, but there’s definitely an ounce of bitter truth worth thinking about.

Anyway, to sum up the media shit storm about the Princeton mom: some blasted her for bringing us back to the dark ages, others commended her for telling the truth. Others, like Ross Douthat, pointed out that she was simply a “traitor to her class.”

This resonated with me the most. After working at an “elite” place like Google, I saw first-hand how those fortunate enough to attend Ivy League schools had an implicit knowledge of their social standings. That’s not to say that they didn’t deserve it–they worked hard. Most of the people I’ve met were truly talented, highly intelligent and self-aware people, but it was really the first time I felt like all the talk I’ve heard about “legacy” and “the elite class” I studied in college had a lot of truth to it.

It also got me thinking that, as uncouth and unpopular as it may be, maybe the Asian parent’s mentality of pushing their kids to the top schools was on to something. Maybe they actually recognized it as the lever to gain access to a higher class. I’ve heard this before, “go to Harvard so you can be rich” but I thought: This is America, those rules don’t apply. I thought about how, growing up in an immigrant family where English was not the first language, we didn’t use SAT words like “latent” or “acumen,” in everyday vernacular, and how, we really had no “in” (no aunts, uncles, parent’s friends) to help us understand how our educational system worked. That’s not to say that only minorities had the shorter end of the stick, but that’s just the only experience I have.

That said, it made me understand how difficult it is to transcend classes as an “outsider.” It made me appreciate the minority groups out there that helped empower others in the same situation, and I grew a greater respect for those who are able to succeed, look back, and offer their wisdom. It took me a while to find those who quietly worked in the background so I can have the opportunities I have, and I hope to do the same.

I guess that’s why I’ve been so appreciative of the work that the Asian American Women’s Artist Association (AAWAA) and Asian Pacific Islander Cultural Center (APICC) do, and I’m looking forward to being a part of the show opening next Thursday, May 2nd. Apologies for the shameless plug, but the 3:00am stream of consciousness somehow brought me here. Thanks for listening. Oh, and come to the show. 🙂

I’ve never considered myself a late bloomer, but lately I’ve started to acknowledge that I am. As I’m learning to see and comprehend new techniques and ideas, I’m continually being humbled by what I still don’t know. I guess that’s what makes the process interesting. 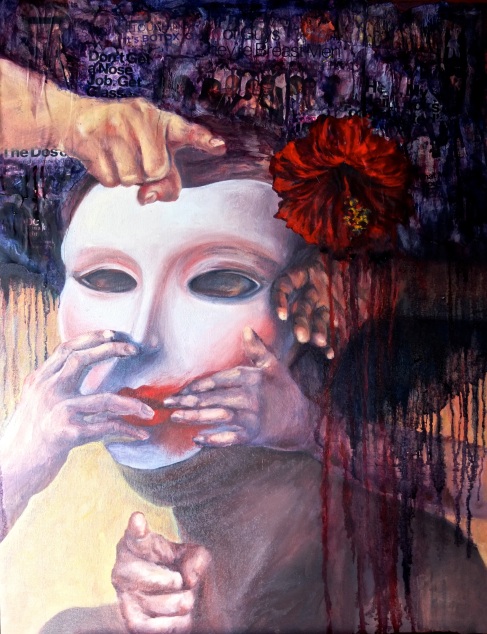 My latest piece attempts to combine various elements of ideas I’ve been mulling over in my brain: the concept of Beauty and Image as a commodity, its falsity, and the punishment women give themselves and others while trying to attain it. The magazine articles I collaged into the background came from just ONE Glamour magazine–just one magazine gave me everything I needed in this piece, including articles like “Don’t get a nose job, get glasses,” or “What men think of your shoes,” and ads like, “Hope in a Jar.”

It wasn’t surprising, but I was surprised—so much of what we grew up and still see just wants to sell us on the unattainable. It’s all there in the background, the white noise that we learn to tune out but still remains. Some women tell me that feminism is irrelevant now, but between the conversations around current events occurring in Steubenville, in India, and even the backlash against Sheryl Sandberg’s Lean In, I think there is still much to be discussed. Feel free to disagree.